War of the Ring: Warriors of Middle-earth

War of the Ring: Warriors of Middle-earth
Out of Stock

War of the Ring: Warriors of Middle-earth

War of the Ring: Warriors of Middle-earth includes Ents, Dead Men of Dunharrow, Great Eagles of the Misty Mountains, Corsairs of Umbar, Wild Hilmen from Dunland, and Giant Spiders, and with this new expansion for War of the Ring (second edition), these warriors and creatures of Middle-earth – previously featured only as special Event Cards – will become an essential part of the game, with unique figures and specific abilities.

Warriors of Middle-earth also presents new mechanisms to enhance the game. Faction Dice and Faction Events, used together with the new figures, open up new and exciting strategies and make the War of the Ring (second edition) even more challenging and fun. 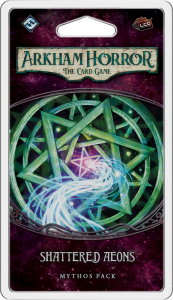 Shattered Aeons is the sixth and final Mythos Pack in "The Forgotten Age" cycle for Arkham Horror: The Card Game.

In The Forgotten Age, you journeyed to the darkest corners of Central America in search of a lost Aztec city-state. What you found during your expedition may be the greatest scientific discover of the age, but it could also be the Earth's undoing.

Throughout The Forgotten Age cycle, you have tried to set your mistakes to right, chasing answers about the mysterious artifact your uncovered and those who pursue it. Retracing your path south, you have uncovered secrets that threaten your entire understanding of the world, of time, and of humanity's place in the universe. Now, the last and greatest of your questions will be answered in Shattered Aeons. But be wary as mere mortals may not be meant to gain such knowledge and the truths you seek may destroy what little remains of your sanity. 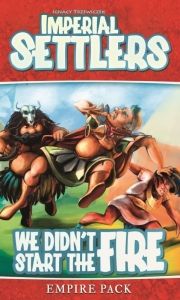 Imperial Settlers: We Didn't Start The Fire is the third Empire Pack for the Imperial Settlers engine-building card game. Join your favorite factions, best your opponents, and expand your empire!

The expansion includes fifty new cards, increasing replayability of the base game, as well as borders that are placed between each pair of players. 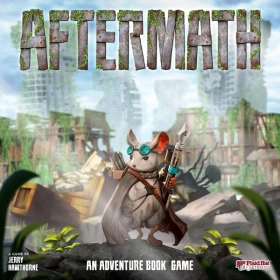 Aftermath is an Adventure Book Game in which players take on the role of small critters struggling to survive and thrive in a big, dangerous world. Humans have mysteriously vanished, and the remnants of civilization are quickly being reclaimed by nature and the animals who still remain.

In the game, you play as a misfit band of critters known by their colony as "providers". There's the guinea pig with anger issues, a hamster that talks fast and drives faster, a small mouse with keen eyes and a lot to prove, and a mysterious vole who's borderline feral. These characters each have their own personalities, play-styles, and personal goals.

You'll leave the safety of your colony and venture out into the abandoned world on one of 20+ story-driven missions and side missions. Scavenge the ruins of mankind in search of food and supplies for your colony, but beware — the world is filled with bandits and predators, and you must fight or flee to stay alive.

Return to your colony with resources and information that will help your friends and family survive. Grow your colony and keep it safe by building structures and improvements with the spoils of your adventures, but plan accordingly, for the colony will face hardship each time you leave it...