The Castles of Burgundy

The Castles of Burgundy
Out of Stock

The Castles of Burgundy

The game is set in the Burgundy region of High Medieval France. Each player takes on the role of an aristocrat, originally controlling a small princedom. While playing they aim to build settlements and powerful castles, practice trade along the river, exploit silver mines, and use the knowledge of travellers.

The game is about placing settlement tiles into the princedom. Every tile has a function that starts when the tile is placed. The princedom itself consists of several regions, each of which demands its own settlement tile.

The core game mechanism involves two dice. The pips show the kind of action the players are allowed to do (example: roll a 2 and a 5: using the 2 the player buys a watch tower and places it on a 5 city tile which triggers the function of the tower with additional advantages).

It is also possible to influence the dice, so the player is not completely subject to luck.

The rules include basic and advanced versions.

• Drive Thru Review by www.drivethruvideos.com 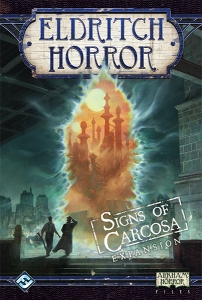 Beneath the light of a gibbous moon, poets and artists pen strange verse and weave arcane sigils into their paintings. The Unspeakable One is entering the world, his horrid city is tearing its way through dimensions, and as it does so, more and more humans succumb to a mindless insanity. The very people you have sworn to protect may come padding after you on a cursed night, knife in hand and the light of evil stars gleaming in their eyes. Whether you’re walking along the streets of Tokyo or through trackless jungles in the heart of Africa, you may be forced to choose between the people close to you and the people of the world.

Signs of Carcosa is a new expansion for Eldritch Horror, and within, you’ll find enough madness to influence all of your games. Hastur enters the game as a new Ancient One, spreading insanity and dissension. Against this foul abomination from Aldebaran, four new investigators join the fight to save the world. A host of new Encounter cards for every continent ensure that fresh adventures are always around the corner, even as a wealth of new conditions, spells, assets, artifacts, and Mythos cards draw you deeper into a world of madness and fear. 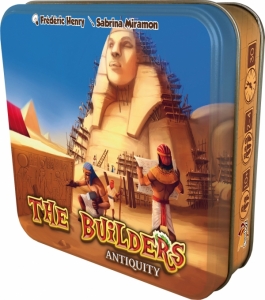 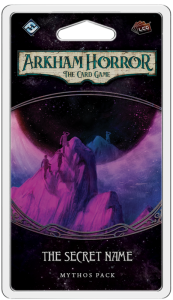 The Secret Name is the first Mythos Pack in The Circle Undone cycle.

Following the events of The Circle Undone, you are desperate to find more information about the dangerous new coven of that has taken up residence in Arkham. Such knowledge is difficult to come by, even in a place like Arkham, but you do know of one witch whose story has been passed down for nearly two hundred years: Keziah, who escaped from the Salem Gaol back in the late 1600’s and whose ghost still supposedly haunts the condemned Witch House in French Hill. With many questions and few leads, you have no choice but to chase the ghosts of Arkham’s past.

As a new cycle begins, you will need new tools to help you battle these unholy forces. To help you with this task, some of the new player cards in The Secret Name belong to more than one class. These cards, which can be identified by their golden hue and dual class icons in the upper right corner of the card, can be added to your investigator’s deck if you have access to either of the classes detailed on the card. If, however, an investigator has limited access to one of the classes on a multiclass card, that card will occupy one of the investigator’s limited slots, even if they have unlimited access to the other class detailed on the card. But with diverse uses and powerful effects, they make a worthy addition to any investigator’s arsenal.