Suburbia (second edition)
Out of Stock

Plan, build, and develop a small town into a major metropolis. Use hex-shaped building tiles to add residential, commercial, civic, and industrial areas, as well as special points of interest that provide benefits and take advantage of the resources of nearby towns. Your goal is to have your borough thrive and end up with a greater population than any of your opponents.

Suburbia is a tile-laying game in which each player tries to build up an economic engine and infrastructure that will be initially self-sufficient, and eventually become both profitable and encourage population growth. As your town grows, you'll modify both your income and your reputation. As your income increases, you'll have more cash on hand to purchase better and more valuable buildings, such as an international airport or a high-rise office building. As your reputation increases, you'll gain more and more population — and the player with the largest population at the end of the game wins.

During each game, players compete for several unique goals that offer an additional population boost — and the buildings available in each game vary, so you'll never play the same game twice!

The second edition of Suburbia features updated artwork, larger tiles than in the original game, a dual-sided scoreboard, GameTrayz storage organizers, and more!

As you might expect from the name, Sagrada: 5 & 6 Player Expansion expands the game of dice-drafting and window-crafting so that up to six players can compete at once.

The expansion will introduce Private Dice Pool boards for a quicker gameplay experience at higher player counts. There will also be new private and public objectives, tools, and window cards. 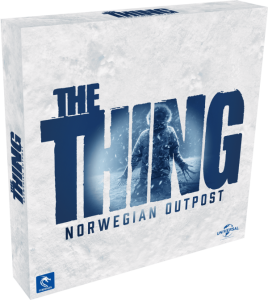 This expansion for The Thing - The Boardgame allows you to experience the events that happened at Thule Station, the Norwegian station where it all began! As for the 1982 version, the expansion lets you relive the tensest moments from the story, transporting you into the cinematic film!

The core element of the game is based on the emulation properties of the Thing, which will hide its identity under a blanket of fake humanity, but with substantial differences in the way they interact with the game and with your feelings.

Here are the key points of the expansion:

A new board, new characters, and new materials.
A new end game condition represented by the escape of the dog that will arrive at Outpost 31. IF this happens, you can play your next game of the 1982 version with a pack leader dog (a dog that behaves differently throughout the game).
A new element in the game: teeth! The Thule Station crew discovers that the Alien cannot assimilate and duplicate metal parts, so dental fillings become a way to find out if a person is definitely human, but not if they are alien. The test with the wire and the flamethrower disappears and flashlights are added with which it will be possible to carry out a test and look at the teeth of the other characters, checking for the presence or lack of fillings.
A new location is available for the Thing: The UFO! It represents the last hope of escape for the Thing, as in the movie. The final confrontation with any remaining humans will take place here. Of course, this is only an option, and just like the dog escape mentioned above, it doesn't necessarily happen! Everything will depend on your behavior, as you can win or lose in many ways!


In the 2011 film, as soon as they found out what's going on, people's behavior becomes more selfish, trying by all means to save their own lives. We therefore decided to try to include the possibility of a solitary escape, an element that will bring the level of distrust to the maximum! This also brings new mechanics, such as the ability to voluntarily sabotage vehicles even if you are human.
The expansion will contain: a new board, new characters, new cards and new tokens. 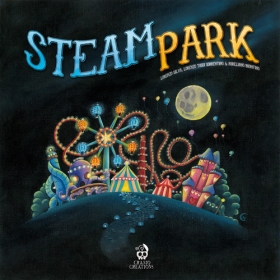 As owners of a fantastic steam park, you're to build gigantic, coal-powered rides to attract as many visitors as you can – but building attractions won't be enough. You'll also need to manage your employees, invest in advertising in order to attract and please the different kinds of guests visiting your park, and, above all, keep the dirt that your park produces under strict control!