A call to arms! An abomination of a beast is terrorizing villages throughout the kingdom, leaving behind a path of death and destruction. The lord has summoned all able-bodied adventurers to return to the capitol and organize a plan to rid the kingdom of this menace.

In Roll Player: Monsters & Minions, not only do players compete to construct the greatest fantasy characters, they must also gather information about the monstrous threat looming, and prepare for a final showdown against the beast. The more prepared the adventurers are for the battle, the better they'll do, but that information doesn't come for free. Listen for rumors to gather details for the fight ahead. Where is its lair? What obstacles will there be along the way? What will its next strike be?

Players earn Reputation Stars by constructing the perfect character, as well as driving back the evil of the monster and its minions. The player with the greatest Reputation wins the game and becomes the heir to the kingdom!

Iron Man and Black Panther team up to stop Rhino from rampaging through the streets of New York. Captain Marvel and Spider-Man battle Ultron as he threatens global annihilation. Do you have what it takes to join the ranks of these legendary heroes and become a champion?

Jump into the Marvel Universe with Marvel Champions: The Card Game, a cooperative Living Card Game for one to four players! 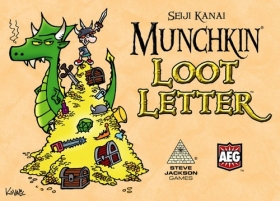 Munchkin: Loot Letter brings all the fun of getting a ton of gold in just 16 cards, and none of the mushy kissy stuff from that other game... 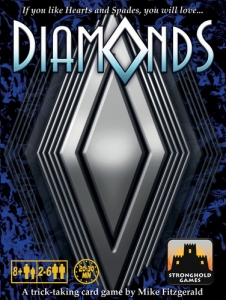 Diamonds is a trick-taking card game in which players collect Diamonds — not cards bearing that suit, mind you, but rather actual "Diamond Crystals" included in the game.

What makes the game of Diamonds different from other trick-taking card games is that when you cannot follow suit you get a "Suit Action" based on what suit you do play. Suit Actions are also taken by the winner of each trick, as well as at the end of a full Round of play. Suit Actions will enable players to take Diamond Crystals from the Supply, moving them to their Showroom (where they may score 1 point) or to their Vault (where they will score 2 points). The Vault is a secure area, but the Showroom is vulnerable to theft by the other players.

Whoever has the most points in Diamond Crystals at the end of the game wins!