Oath: Chronicles of Empire and Exile

Oath: Chronicles of Empire and Exile - New Addition!
Out of Stock

Oath: Chronicles of Empire and Exile

In Oath, one to six players guide the course of history in an ancient land. Players might take the role of agents bolstering the old order or scheme to bring the kingdom to ruin. The consequences of one game will ripple through those that follow, changing what resources and actions future players may have at their disposal and even altering the game's core victory condition.

If a player seizes control by courting anarchy and distrust, future players will have to contend with a land overrun by thieves and petty warlords. In a later game, a warlord might attempt to found a dynasty, creating a line of rulers that might last generations or be crushed by the rise of a terrible, arcane cult.

In Oath, there are no fancy production tricks, app-assisted mechanisms or production gimmicks. The game can be reset at any time and doesn't require the same play group from one game to the next. A player might use the fully-featured solo mode to play several generations during the week and then use that same copy of the game for Saturday game-night with friends. There are no scripted narratives or predetermined end points. The history embedded in each copy of Oath will grow to be as unique as the players who helped build it. 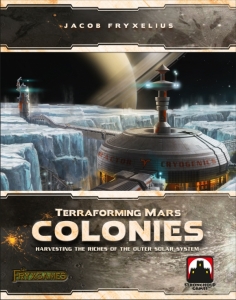 Our world has widened before us. Corporations expand their operations to all corners of the solar system in pursuit of minerals and resources. Most places are not suited for terraforming, but building colonies may greatly improve your income and your possibilities in achieving that higher goal — the terraforming of Mars. Send your trade fleet to distant moons! Colonize the clouds of Jupiter! And let your Earth assets propel you to success!

Terraforming Mars: Colonies, an expansion for Terraforming Mars that can be played with only the base game or with any combination of expansions, lets you visit the outer solar system. It features colony tiles where you can build colonies and send your trade fleet. It also includes new cards and corporations. 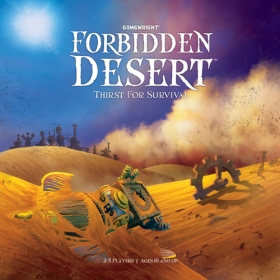 Gear up for a thrilling adventure to recover a legendary flying machine buried deep in the ruins of an ancient desert city. You'll need to coordinate with your teammates and use every available resource if you hope to survive the scorching heat and relentless sandstorm. Find the flying machine and escape before you all become permanent artifacts of the forbidden desert! 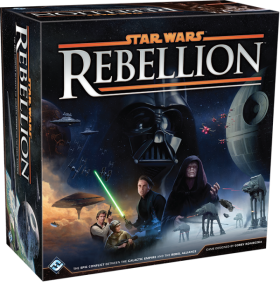 Star Wars: Rebellion is a board game of epic conflict between the Galactic Empire and Rebel Alliance for two to four players!

Experience the Galactic Civil War like never before. In Rebellion, you control the entire Galactic Empire or the fledgling Rebel Alliance. You must command starships, account for troop movements, and rally systems to your cause. Given the differences between the Empire and Rebel Alliance, each side has different win conditions, and you'll need to adjust your play style depending on who you represent: the Imperial player or the Rebel player.