Innovation (third edition): Figures in the Sand
In Stock!

Innovation: Figures in the Sand, an expansion for Carl Chudyk's Innovation, breaks from the format of that game by providing players with recognizable figures from history (instead of new inventions or concepts) with those figures showing up on your table to help you win the game – or maybe your opponent. Historical figures tend to be somewhat fickle.

Figures includes 105 figure cards, with the cards being similar to Innovation cards in that they're divided into ten ages with five colors of cards in each age. Instead of including a dogma power that players can use on their turn, each card in Figures has a karma that changes the game in some way. Karmas might take effect when you meld a card, when you're counting icons to determine whether you can share an action, or when you take some other action in the game. Instead of melding a card, for example, you might score it, or instead of giving cards to opponents who demand from you, you might return cards to the age decks.

Innovation: Figures in the Sand includes five Decree cards, one for each color. Decrees are a special type of achievement, but unlike all other achievements Decrees are not safe and can be stolen.

A player can have only one Figure in play after any action in the game; any additional Figures Fade from play, moving to your score pile.

Innovation: Figures in the Sand can be played with just the base game or combined with the Innovation: Echoes of the Past expansion. 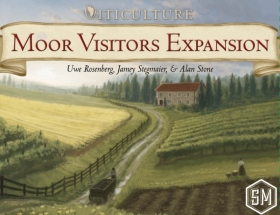 Viticulture is a worker-placement game set in the foothills of Tuscany. 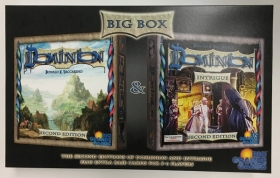 This Big Box edition comes with the new 2016 versions of Dominion and Dominion: Intrigue, as well as additional basic cards for 5 and 6 player games. 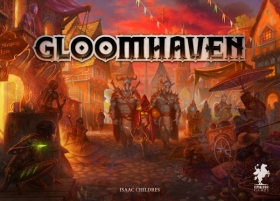 Gloomhaven is a game of Euro-inspired tactical combat in a persistent world of shifting motives. Players will take on the role of a wandering adventurer with their own special set of skills and their own reasons for travelling to this dark corner of the world. Players must work together out of necessity to clear out menacing dungeons and forgotten ruins. In the process they will enhance their abilities with experience and loot, discover new locations to explore and plunder, and expand an ever-branching story fueled by the decisions they make.

This is a legacy game with a persistent and changing world that is ideally played over many game sessions. After a scenario, players will make decisions on what to do, which will determine how the story continues, kind of like a “Choose Your Own Adventure” book. Playing through a scenario is a cooperative affair where players will fight against automated monsters using an innovative card system to determine the order of play and what a player does on their turn.