Arkham Horror: The Card Game – The Circle Undone
In Stock!

The soothsayer’s tarot wove a tale of a grim future, hard to put out of your mind. But when you learn that four people have disappeared without a trace from an estate in French Hill, you begin to wonder if this cruel fate is meant only for you, or for the entirety of Arkham…

The Circle Undone is the fourth deluxe expansion for Arkham Horror: The Card Game. Here, your team of investigators delve into the mysteries of Arkham’s past, uncovering its macabre history and the motives of those who dwell in its shadows. This expansion contains a playable prologue, first two scenarios of The Circle Undone campaign, as well as new investigator and player cards to further customize your investigations in the world of H. P. Lovecraft’s Mythos. 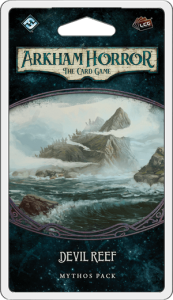 Devil Reef is the second Mythos Pack in The Innsmouth Conspiracy cycle.

The fishing hamlet of Innsmouth may soon be overwhelmed by rising tides and swarming deep ones - but in your fractured memory, you're still putting together the pieces of your time in this mist-shrouded village. As you stare out at the ill-omened shoals and scattered islands of Devil Reef, you can feel a new piece of the puzzle falling into place. You were out there, among the islands, searching for evidence of the Esoteric Order of Dagon...

Within this Mythos Pack, you'll find the next scenario of the tangled campaign unfolding around the events of The Innsmouth Conspiracy. You'll flashback to your voyage out to Devil Reef three weeks prior—exploring the islands rumored to be haunted by terrible powers, and where you suspect the Esoteric Order of Dagon is hiding something. With the game's first vehicle-driven scenario and an assortment of new player cards for every class, Devil Reef is a gripping next chapter in your unfolding tale of rising tides and encroaching madness. 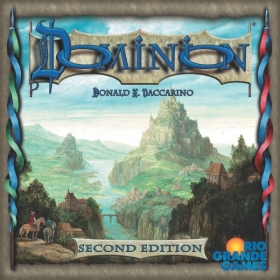 "You are a monarch, like your parents before you, a ruler of a small pleasant kingdom of rivers and evergreens. Unlike your parents, however, you have hopes and dreams! You want a bigger and more pleasant kingdom, with more rivers and a wider variety of trees. You want a Dominion! In all directions lie fiefs, freeholds, and feodums. All are small bits of land, controlled by petty lords and verging on anarchy. You will bring civilization to these people, uniting them under your banner.

"But wait! It must be something in the air; several other monarchs have had the exact same idea. You must race to get as much of the unclaimed land as possible, fending them off along the way. To do this you will hire minions, construct buildings, spruce up your castle, and fill the coffers of your treasury. Your parents wouldn't be proud, but your grandparents, on your mother's side, would be delighted.'"'

In Dominion, each player starts with an identical, very small deck of cards. In the center of the table is a selection of other cards the players can "buy" as they can afford them. Through their selection of cards to buy and how they play their hands as they draw them, the players construct their deck on the fly, striving for the most efficient path to the precious victory points by game end.

Dominion is not a collectible card game (CCG), but the play of the game is similar to the construction and play of a CCG deck. The game comes with 500 cards. You select 10 of the 26 Kingdom card types to include in any given play—leading to immense variety.

Dominion (Second Edition) replaces six Kingdom card types from the first edition with six new types of Kingdom cards, while also replacing the blank cards in the game with a seventh new Kingdom card. These new cards are available on their own in the Dominion: Update Pack. The rulebook has been rewritten, three cards have mild functional changes ("you may" added to Moneylender, Mine, Throne Room), and other cards have been rephrased (while remaining functionally the same).

Dominion: Update Pack contains the seven new kingdom cards introduced in the second edition of Dominion, thereby allowing owners of the first edition to obtain these new cards without needing to repurchase the entire game. 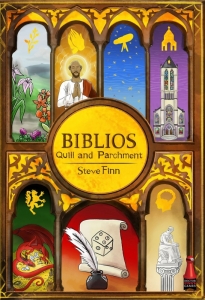 A "roll and write" version of the popular Biblios.

The life of a monastic scribe is not easy. Every day you spend long hours in the monastery copying books, praying, and performing tasks. Through hard work and prayer, earn the abbot’s trust and display your dedication to the pious life.