A Game of Thrones: The Board Game (Second Edition) - A Dance with Dragons Expansion

A Game of Thrones: The Board Game (Second Edition) - A Dance with Dragons Expansion
In Stock!

A Game of Thrones: The Board Game (Second Edition) - A Dance with Dragons Expansion

"This is another world, thought Tyrion, but not so different from the world I know."
-George R.R. Martin, A Dance with Dragons

The ever-changing political and military landscape of George R.R. Martin's A Song of Ice and Fire ensures that no Great House can hope to maintain control for long. But although the players may change, the fundamental game will always remain the same.

With 42 alternate House cards that feature the characters relevant to this period of Westeros' history, A Dance with Dragons is a special scenario that immediately thrusts players into a grim struggle for survival. After a brief alternate setup to reflect each House's position in Westeros, you'll quickly be forced to forge new alliances and discover new strategies.

While A Game of Thrones: The Board Game Second Edition presents events as they occurred in the first two novels of Martin's series, clever scheming and timely betrayals throughout the subsequent three novels dramatically alter the fortunes of each Great House. The A Dance with Dragons scenario imagines Westeros as it appears in the fifth book of A Song of Ice and Fire. 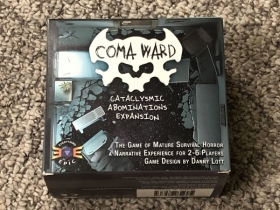 
The Doctor, the Dinosaur, and the Cerebral Digitizer
Alien Ant Farm
If Hell Were Only Pain, This Place Would Be Paradise
If I Kill a Rich One
As Time and Reality Dissolve
To Hell and Back
Messiah Complex
Ghost of a Chance
What Wicked Dreams We Weave
Are Gods Born or Made?
Sanctuary, Part 1
Sanctuary, Part 2 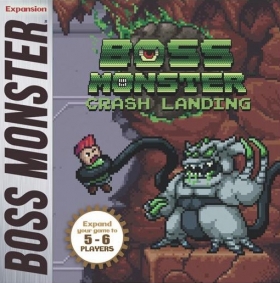 An alien vessel has crashlanded in the land of Arcadia, bringing with it Boss Monster: Crash Landing, an out-of-this-world expansion to the world of Boss Monster!

Crash Landing expands the dungeon-building card game to 5-6 players and introduces a new set of science fiction-themed Bosses, Heroes, Spells, and an all new treasure type, the Alien Artifact. Will you play as one of the new alien Bosses, using technology and otherworldly monsters to lure in intrepid Explorers and slay them? Or will you play as one of the classic Bosses, using your spells and monstrous cunning to teach these alien upstarts who the baddest dude in the land is? With Crash Landing you can teach even more of your friends a lesson in deadly dungeon design. 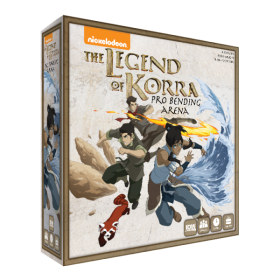 The Legend of Korra: Pro-Bending Arena

Based on the fan-favorite Nickelodeon animated series, The Legend of Korra: Pro-Bending Arena is a two-player competition of wits, tricks, and speed as players take control of Republic City's favorite sport.

Focusing on the rivalry between the Future Industries Fire Ferrets and The White Falls Wolfbats, The Legend of Korra: Pro-Bending Arena has two players each taking control of a team, drafting card decks for their benders, then playing cards to place elemental tokens around the board in an effort to overwhelm their opponent. As in the show, pro-bending matches are a game of push and pull, with an objective toward being the team that has either advanced the farthest forward, or completely knocked their competitors out of the ring.

The objective of the game is simple: be on the other team's side of the arena when the game ends and you will be victorious, or dominate the competition, pushing all their benders off the back of the arena to end the game immediately and claim the championship as yours!